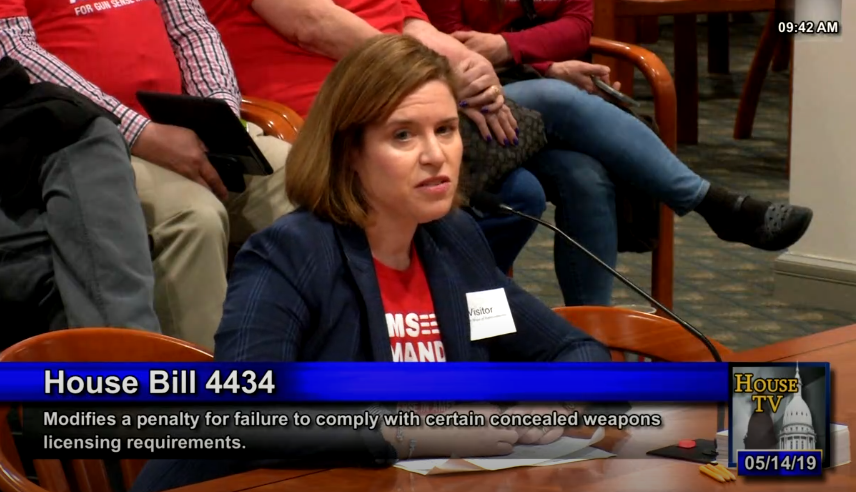 May 15, 2019 - Yesterday, in the Michigan House Judiciary Committee, Michigan chapter leader for Moms Demand Action Emily Durbin indicated that her organization supports punishing those who forget to renew their Concealed Pistol License on time with 5 years in jail.

Her testimony came in opposition to HB 4434, sponsored by State Representative Matt Hall, which seeks to reduce the current 5-year felony for carrying a concealed pistol with an expired license to a civil infraction, provided the licensee still qualifies to have their license renewed (clean criminal record & license expired for less than 1 year). HB 4434 currently has 32 bipartisan cosponsors (nearly 1/3rd of the entire 110-member chamber) and has already passed one committee with unanimous bipartisan approval.

After Mrs. Durbin's testimony, State Representative Steve Johnson asked her flatly if she supports 5 years in jail for those who don't renew their license on time. After being prodded for a clear answer, she replied: "yes." (watch it for yourself)

Never forget this nonsense. The next time, and every time thereafter, that you hear how they just want "common-sense gun reform," this should be the first thought in your head.

Following the above answer, Rep. Johnson then questioned Mrs. Durbin's testimony that the bill would allow someone "with a recent violent criminal history to carry concealed handguns throughout the state," despite the bill's clear inapplicability to said individuals. The following exchange took place:

Mrs. Durbin: "What about persons who would, who are incentivized to continue carrying without maintaining that valid permit and seek not to be repermitted knowing that if they do so they would fail that background check."

Rep. Johnson: "Under this legislation, they wouldn't qualify."

Mrs. Durbin: "They wouldn't qualify for this change, in the penalty, but by changing the penalties, you incentivize persons who know that they might fail that background check upon renewal to not seek renewal."

Rep. Johnson: "Nothing would change for them actually."

[Committee chair interrupts and moves to the next committee member. State Representative Ryan Berman then attempts to also explain the issue to Mrs. Durbin with worse results.]

(again, watch it for yourself)

This is the opposition folks. This is who we are up against. These are the people claiming to be centralist moderates pushing common-sense ideas supported by the vast majority of this country.

This is also not the first time that this organization has provided testimony in committee so extreme that it likely helped us and we can only assume that it won't be the last.

If you would like to watch all of the testimony, we have published the relevant portion of the hearing to our YouTube channel here: https://youtu.be/FBqesToFpxI